Piaggio Commercial Vehicles has relaunched in the UK with a new website to inform customers on the latest models available, and the company’s new status as the official distributor of Piaggio spare parts in the UK.

The Ape and Porter Range represent the Piaggio Group in the light-commercial vehicles sector. The Porter has a good standing in the UK and was recognised as WhatVan’s Microvan Winner of the year 2004-2010. The Ape will be celebrating its 70th anniversary in 2018.

The vehicle models available include the new Piaggio Porter Euro 6 in the Van, Fixed Deck, Tipper and Chassis variants. The left-hand drive vehicle is advantageous for many business solutions. For example, it allows the driver to exit the vehicle on the same side of the pavement, making it ideal for situations when the driver has to repeatedly exit the vehicle.

The Piaggio Ape models include the Ape 50, Ape Classic and Ape Calessino. The relaunch of the Piaggio Commercial website highlights the versatility of the light-commercial vehicles, with dedicated sections on electric power and vehicle conversion options.

The Porter Electric, available in all model variants, and Ape 50 Electric are both zero- emissions vehicles, and thus ideal for operating in areas subject to congestion charges or zero-emissions zones.

As the sole official distributor of Piaggio Commercial Vehicles in the UK, it was important that customers who own a vehicle in the range, could also benefit from ordering spare parts through the company’s new spare parts service.

The relaunch of Piaggio Commercial delivers a greater experience to customers and highlights the significance of the Ape and Porter range in the years ahead.

Jason O’Neill Managing Director of Piaggio Commercial said: “It is an exciting time for the Piaggio light-commercial vehicle sector, especially with the planned partnership between Piaggio Group and the Foton Motor Group.

This new partnership will see the development and production of a new range of four-wheel light commercial vehicles, that will launch from 2020.

We look forward to bringing both future and existing models to the UK to enable more people to enjoy the Piaggio brand.” 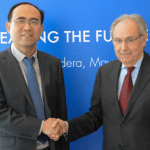 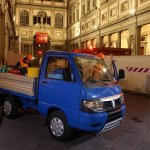 Hi do you supply spare parts for a piaggio Porter 2007

can you advise of a dealer in devon Uk?